Datasets offered by Polity1 and Freedom House2 generally fall into the former, while direct assessments of constitutional and electoral composition like the Institutions and Elections Project3 and the Comparative Constitutions Project4 make up the latter. Other datasets like the Varieties of Democracy5 present an interesting blend of both. Neither are better than the other; they both have their merits depending on the use case. Relying on composite indices derived by long time experts can spare you weeks of exploratory analysis and derived variable construction, while using highly disaggregated metrics or de jure measures of institutional capability may better serve narrowly focused research questions. 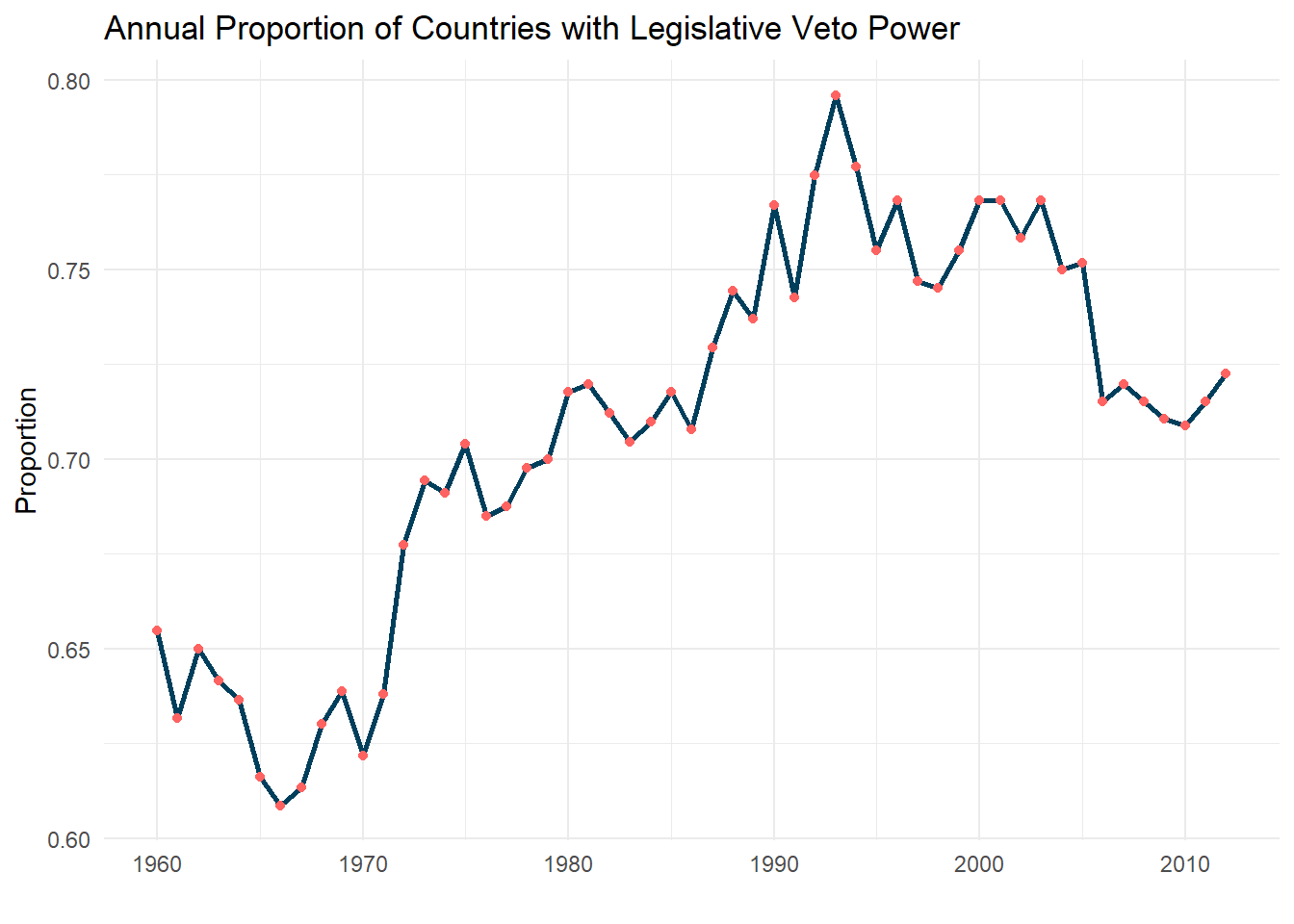 The most similar dataset to IAEP is the Comparative Constitutions Project’s Characteristics of National Constitutions (CNP). The central goal of the CNP is to provide data to legal scholars assisting in the drafting of constitutions.8 In doing so, they created a rich resource for political scientists and environment-security researchers looking to examine the causal relationships between institutional structure and political outcomes. The CNP and IAEP datasets have a lot of overlap, but differ in some ways. While the CNP is almost entirely focused on constitutional structure, the IAEP contains variables that also characterize rules dictating participation in elections, candidate nomination procedures, and provisions concerning the central bank. Additionally, the Comparative Constitutions Project provides 2 complimentary datasets: 1) Constitute;9 verbatim text transcriptions of national constitutions, and 2) the Chronology of Constitutional Events;10 a narrowly focused country-year dataset tracking changes to national constitutions. Moreover, the CNP contains a longer historical record than IAEP (1789 vs. 1960). Lastly, both datasets receive only intermittent updates (2-3 over 15 years of existence). Subsequently, they are more applicable for static research interest, because infrequent updates limits the ability to create production pipelines or annual forecasts using the data as it becomes more dated. In these instances, DPI may be a better dataset, because it receives updates every 2-4 years.

This article presents an updated version of the Institutions and Elections Project (IAEP) dataset. The dataset comprises information on 107 de jure institutional provisions, and 16 variables related to electoral procedures and electoral events, for 170 countries in the period 1960–2012. The dataset is one of the most encompassing datasets on global institutional variation that explicitly codes de jure formal institutions. This article presents the dataset and compares it with existing datasets on political institutions, highlighting how the IAEP’s focus on disaggregated de jure institutions complements existing datasets that combine de facto and de jure elements. We illustrate the potential uses of the data by constructing indices that capture institutional dimensions beyond the standard democracy–autocracy dimension, and that represent different ways of using the data for index construction. Finally, we illustrate potential applications by conducting a short replication and expansion of a recent study of democracy and civil war onset.