This vignette describes the use of exactextractr to summarize populationand elevation data from the Gridded Population of the World and EU-DEM datasets.

The exactextractr package includes samples of both of these datasets, cropped to the extent of São Miguel; the largest and most populous island of the Azores archipelago.

This vignette uses the following packages:

To begin, we load the population count file from GPW. This raster provides the total population in each pixel for the calendar year 2020. Then we overlay the boundaries for the six municipalities, or concelhos, into which the island is divided on the GPW grid. The population is concentrated along the coastlines with smaller inland communities located in volcanic calderas. 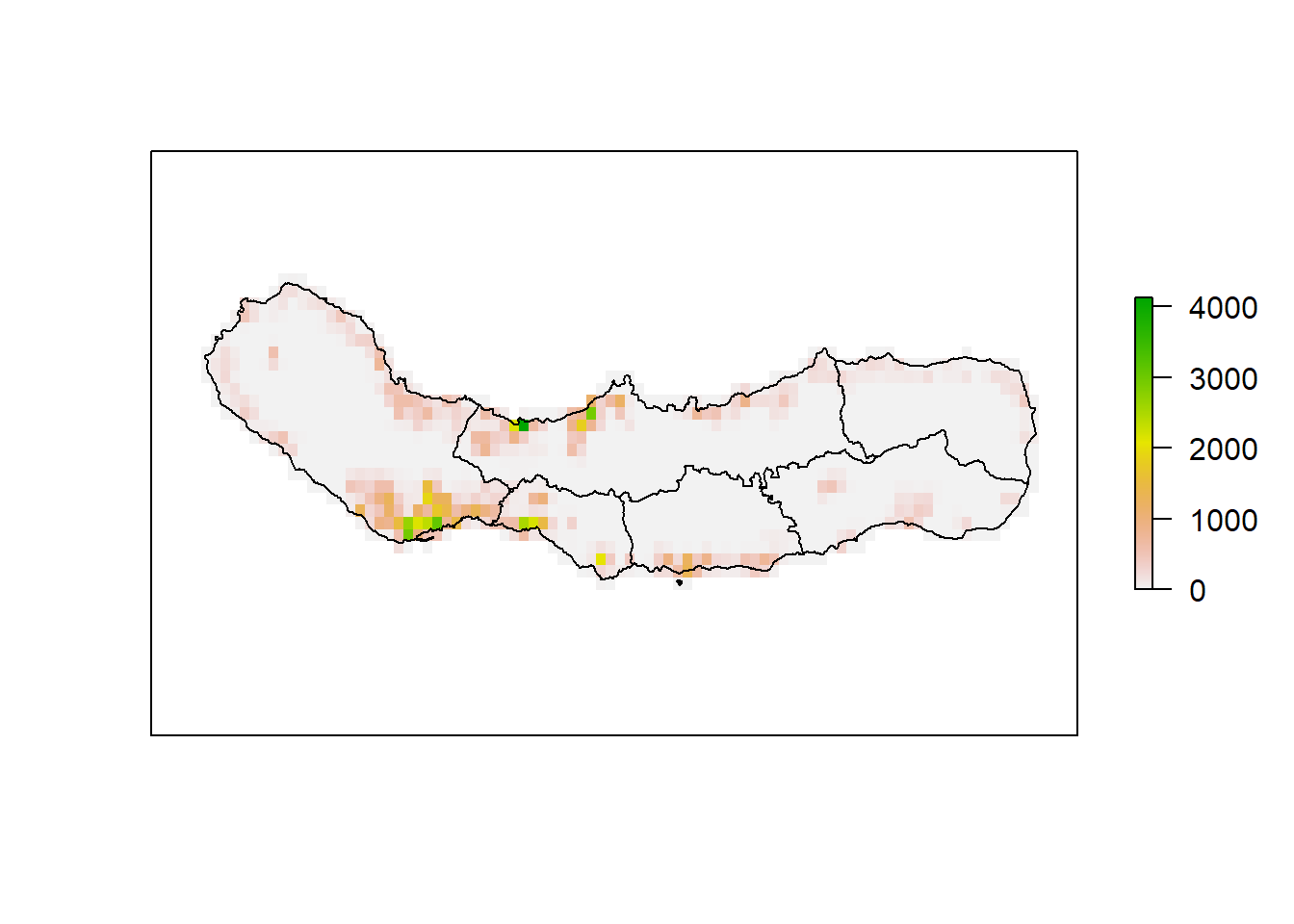 Because the population count raster is cropped and contains no land area outside of São Miguel, we can calculate the total population of the island using the cellStats function from the raster package.

To calculate the populations, we used fun = 'sum', where 'sum' is a named summary operation recognized by exactextractr. A full list of supported operations can be found in the function documentation for exact_extract. If none of the named operations are suitable, we can set fun equal to an R function such as:

However, named operations are generally faster than R equivalents and use less memory when using large raster or shapefiles.

To review the results more easily, we can use the append_cols argument to copy columns from the input sf object into the result of exact_extract. We also use some dplyr operations to add a column for the total population of all concelhos:

This produces the following table:

We might reasonably expect the total population to equal the value of 145,603 we previously obtained using cellStats, but it doesn’t. In fact, 9% of the population is unaccounted for in the concelho totals.

The cause of the discrepancy can be seen by looking closely at the densely populated Ponta Delgada region on the southern coast. Many of the cells containing population are only partially covered by the concelho boundaries, so some of the total population calculated by cellStats is missing from the totals. 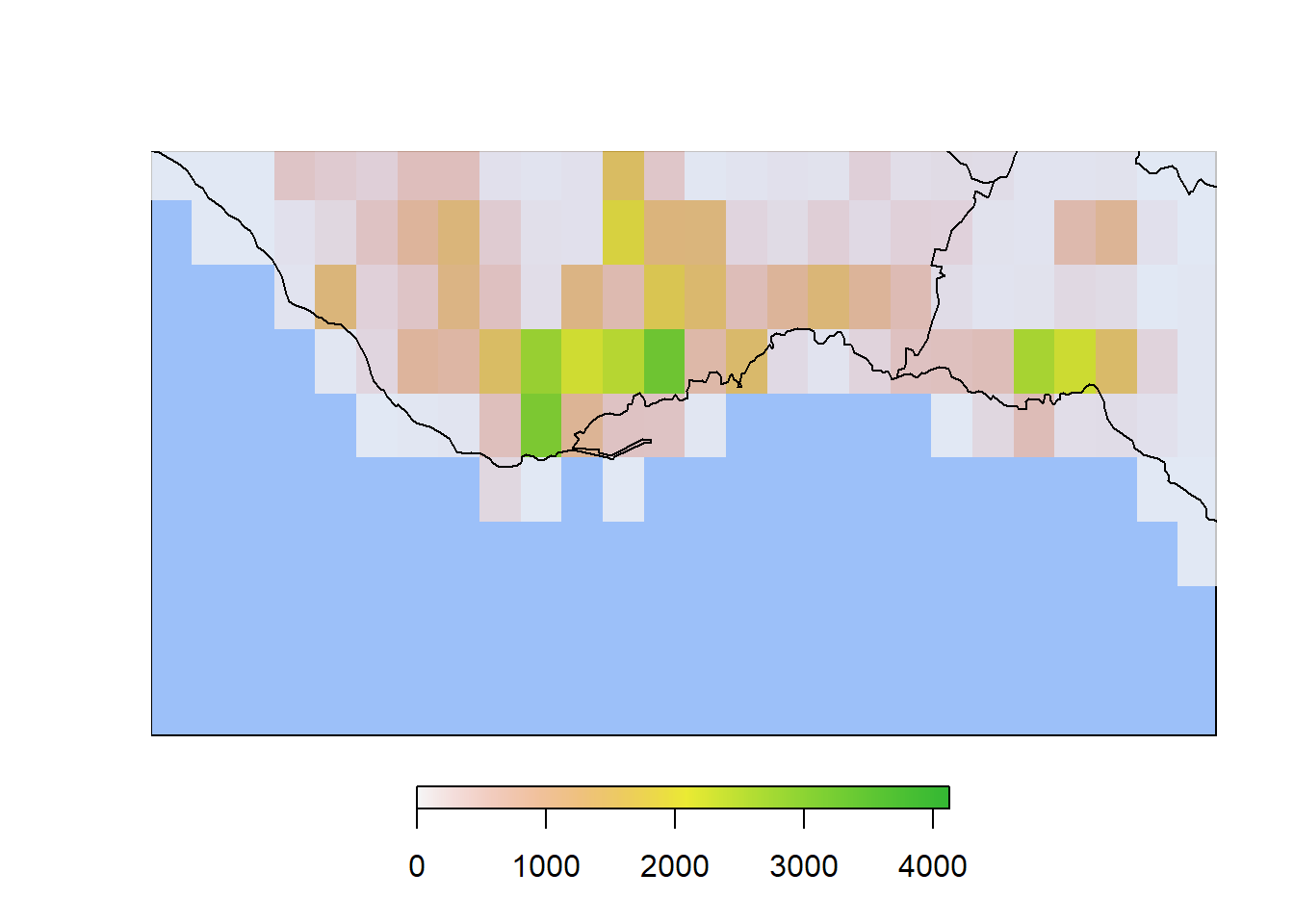 This can be written as follows:

This produces the following table:

The total population obtained using this method is remarkably close (within 0.55%) to the expected value from cellStats.

While this solution works well for the sample data, it has a couple of disadvantages for larger data sets:

Alternatively, we can use the weighted_sum summary operation with the weights = 'area' argument instead of an R function. This instructs exact_extract to compute its own cell areas based on the projection of pop_density.

Suppose that we are interested in calculating the average elevation of a residence in each of the six concelhos. Loading the island’s EU-DEM elevation data, we can see that each concelho is, at least partly, occupied by interior mountains. This indicates that the results of a simple mean would be unrepresentative of the (primarily) coastal population. 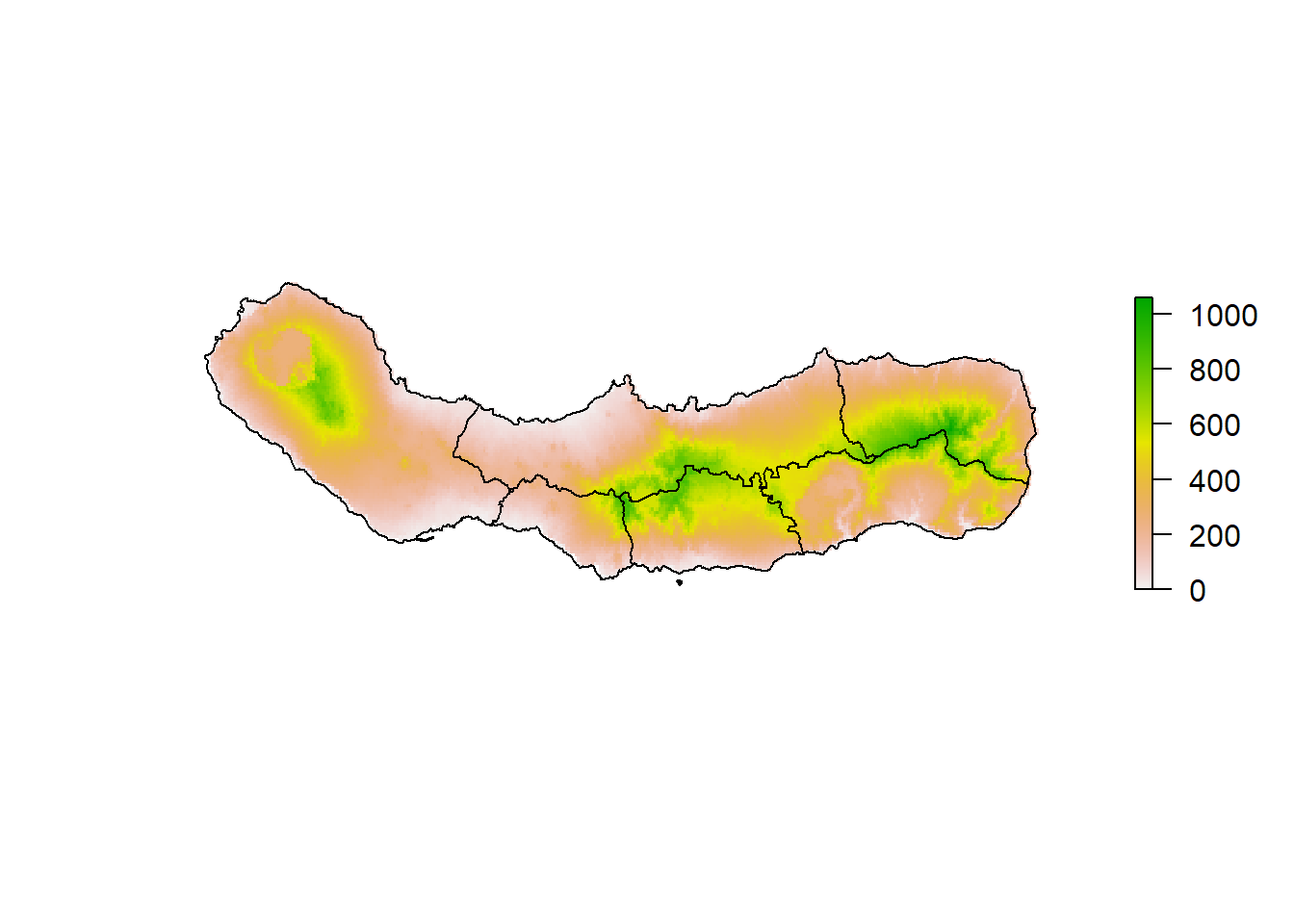 As in the previous section, we avoid working with the population count raster to prevent population loss along the coastline. We can formulate the population-weighted average elevation in terms of population density and pixel areas as:

If we are working with projected data, or geographic data over a small area like São Miguel, we can assume all pixel areas to be equivalent, in which case the \(a_i\) components cancel each other out and we are left with the direct usage of population density as a weighting raster:

What if pixel areas do vary across the region of our analysis?

One option is to create a scaled population count raster by multiplying the population density by the pixel area. For pixels that are partly covered by water, this inflates the pixel population such that we obtain the correct population when only the land area is covered by a polygon. This requires that we create and maintain a separate raster data set.

Another option is to create a RasterStack of pop_density and area(pop_density), and write a summary function to handle the necessary processing. We use the summarize_df = TRUE argument to combine the elevation, population density, pixel area, and pixel coverage fraction into a single data frame that is passed to the summary function.

This solution shares the same limitations with the previous example using an R summary function with raster::area(): we must precompute an area raster and store it in memory, and load all raster values intersecting a given polygon into memory at once.